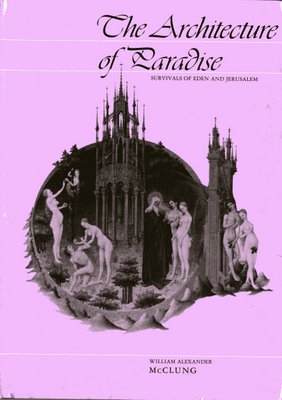 Subtitle: Survivals of Eden and Jerusalem.
I read the book, I then had the pleasure of meeting the author himself and later on publish his Paper, together with others, in a volume on the Symbolism of Space (cities, islands, gardens ): A SIMBÓLICA DO ESPAÇO,cidades, ilhas, jardins, ed.Estampa, Lisboa 1991.
I hope the volume has not been destroyed , as it so frequently happens, when a publisher needs more space (with no symbolism at all...).Back to McCLung.
In Survivals of Eden he quotes Schiller on Aesthetic Education:
"Mankind has lost its dignity,but Art has recovered it and conserved it in significant stones ". Little or nothing has changed,really...
MacClung:
"Paradise is a strange land but a familiar presence; few have been there, but many people have an idea of what it is like. As a garden at one end of time and a city at the other, Paradise is in one sense remote from wordly concerns.But Eden has not been allowed to rest in memory, nor Jerusalem to choose its time of arrival....Both literature and architecture have mainteinde Paradise in our lives as a real presence. In both media the translations, or re-creations, are both literal and metaphoric."
I will leave those interested in reading with a final quotation:
" The line of transmission from mythical to metaphoric models of Paradise is neither single nor direct...It is my belief that the wide range of the present study, though diffusing the pedigree of modern architecture through many areas of inquiry and achievement, will contribute to an understanding of its ultimate source."
The reader will find here a wide range of information on literature, starting with Homer, arts and archeology, as well as on architectural modern and contemporary creators, that will make him or her, as it did with me, a faithful follower of MacClung' work.
Posted by Yvette Centeno at 8:24 PM